Exercise in puppies and young dogs – how much is healthy, and what is the right kind?

When a puppy moves in, it’s an exciting time. You want to show him the world and experience everything together. A puppy or young dog also has a boundless drive to explore. Still, you should demonstrate some caution here as well. It isn’t healthy for a puppy to take hours-long walks over long distances.

That is too much strain for the dog, and its bones and joints are not yet ready for that much effort. Excessively strenuous activity at this age can cause joint problems.

In dogs, bone development takes place from the inside out. That means the bones are present from birth, but they aren’t yet fully formed. Not until the dog reaches its full adult size do the growth plates of the bones fully close.

So how much physical activity should my puppy get?

It isn’t possible to give a “one size fits all” answer, since that depends on the dog’s age and breed. A small dog like a Dachshund reaches full size sooner than a large one like a Bernese Mountain Dog. The growth plates close in a small dog at around ten to 12 months, while the process takes about 16 to 18 months in very large breeds. Medium-sized dogs reach their full size at about 12 to 14 months.

As a basic principle, though, every dog should be considered individually, since rates of development vary widely. Until the growth plates have closed fully, owners should definitely keep an eye on the intensity of physical activity and make adjustments.

Puppy exertion: what about the five-minute rule?

There is a “rule” making the rounds on the Internet that says puppies should only run or walk for five minutes for every month of their age.

I don’t think that is a good recommendation. That would mean a three-month-old puppy could only move around for 15 minutes a day. In my opinion, that would actually disrupt the dog’s natural development, both physically and mentally. In addition to restricting the opportunities for activity and movement, the dog is likely to feel restless and show imbalanced behavior.

So increasing the amount of activity by a certain number of minutes doesn’t make much sense. After all, your dog’s bones and joints need exertion and movement to develop healthily!

Drastically limiting physical activity means the musculoskeletal system does not get enough exertion, so the joint structures that form may be soft. That in turn leaves the dog more susceptible to joint problems like arthritis.

A healthy amount of physical activity is what gives the bones and joints a chance to adapt to exertion in the first place. The joint structures are strengthened, and the body’s adaptation to the tensile forces and pressures that arise on physical activity is also promoted.

What happens if a puppy or young dog overexerts itself?

A young dog’s ligaments and muscles are not yet fully formed, and the bones have not yet finished growing. During this phase, though, it is the “immature” bones that carry most of the body’s weight. If a puppy exerts itself too much or the wrong way, the skeleton can be deformed, causing lasting joint damage. Owners who give in to their young dogs’ inexhaustible drive to move and their own great enjoyment of long walks are risking lifelong joint damage, such as arthritis, in their dogs.

I believe it is important not to gear the amount of physical activity a puppy or young dog receives to a certain number of minutes, but instead to find a happy medium. In particular, it’s important to remember that this doesn’t only have to do with going for walks. Instead, it’s about striking a good balance between walks and other forms of activity. That includes playing with people and other dogs, along with targeted and playful movement training, which can take the form of simple, active exercises that promote body awareness, balance and coordination.

And one thing is crucial: dogs need enough time to rest and recover in between! This lets them sleep, calm down, and process what they have learned and experienced. A dog doesn’t have to be coddled, but common sense should tell us it isn’t healthy for a four-month-old dog to go for a one-hour walk all at once.

As just discussed above, targeted exercises are a good idea for puppies and young dogs in order to strengthen their musculoskeletal system and promote healthy movements. At the same time, they are a great way to keep a young dog occupied productively and strengthen the owner’s bond with the dog as well. Here are a few suggestions:

This exercise targets the dog’s proprioception – the perception of its own body in space. It is also good for coordination and balance. No special equipment is required. You can use different surfaces that are available on your walk, like sand, a plowed field, a forest floor full of tree roots, and so on, guiding your young dog over them.

Even an air mattress with very little air inside can be used for this, with the pup walking on it and balancing. Walking on gravel or bubble wrap is also a great way for a dog to strengthen its awareness of its own body.

Other exercise ideas for puppies

You can also have your puppy climb over branches or twigs, go around tree stumps, and climb up mounds of sand. A wading pool with balls inside in the yard is a lot of fun, too.

Whatever you can imagine, the sky’s the limit! Just be sure to keep your dog’s safety in mind at all times. Provide adequate guidance, and be sure to attach a harness and leash.

Take it slow, approaching new exercises with your young dog step by step. At the start, one or two exercises is plenty. You can add more over time.

Your exercise sessions should be short, since they require a lot of concentration, even though they look like just fun. Start out with about 30 seconds and gradually build up over time.

Physical activities to avoid with puppies and young dogs

There are certain movements that tend to harm the joints of puppies and young dogs, so they should be avoided.

Physical activities to avoid with puppies:

In these kinds of motions, the dog increasingly pushes off from the back paws while braking with the front. This puts a lot of strain on the front legs.

Catching a Frisbee or ball while jumping is another no-no. When you look at these movements, you can see that they involve great physical exertion. In addition to the exertion of stopping and landing, which is already intense, the dog also has to turn its body in midair.  This creates a tremendous amount of shear force on the joints. Studies have shown that depending on the speed and the dog’s gait and body weight, movements of this kind can involve forces of anywhere from 700 to 1,000% of the dog’s body weight being exerted on the joints.

These important points should also be kept in mind when it comes to exercise for puppies and young dogs:

Should I let my puppy or young dog climb stairs?

That’s a vexing subject, and one that is frequently debated. In principle, yes, under your control and to a healthy extent.  A puppy or young dog can go up or down a flight of stairs on a leash, under your control. That also helps make sure your dog is familiar with these motions and performs them confidently and reliably. It doesn’t make much sense to wait until dogs are nine months old to teach them about stairs. Doing that would make them much more uncertain in approaching these movements than if they had already had a healthy amount of exposure and practice during puppyhood. But if you have a lot of stairs to climb several times a day, you should carry the dog.

If your puppy or young dog suddenly starts to move with stiff legs, avoids normal movements, or worse, develops a limp, you should definitely take it seriously. Whenever this happens, I definitely recommend that you take the dog to the vet for further examination.

As a rule, you should use common sense when deciding about physical activity for any young dog. Neither too much nor too little is healthy. Don’t coddle your dog, but don’t overdo it, either. After all, you want to spend as long as you can with your furry friend by your side!

My name is Martina Flocken, and I have been a certified dog physiotherapist since 2010. I am excited about how much we can accomplish with our dogs through targeted movement and active exercises. As a result, my work focuses on active movement training to maintain and promote your dog’s fitness and mobility. www.doggy-fitness.de tells you all about how dogs move, and it provides information about illnesses that affect the motor system as well as about senior dogs – including everyday tips. You can also find information about sporting dogs and prevention.
I live with my two Podenco dogs, Tessa and Snowy, who are a huge help in developing new workout approaches.
My regular workouts with Tessa and Snowy also produced an innovative workout concept: designing online courses for dog owners so they can use active movement exercises to meet their dog’s individual needs.

Mood transference: Does my dog know how I feel? Swimming for dogs in the summer – important information to keep in mind! 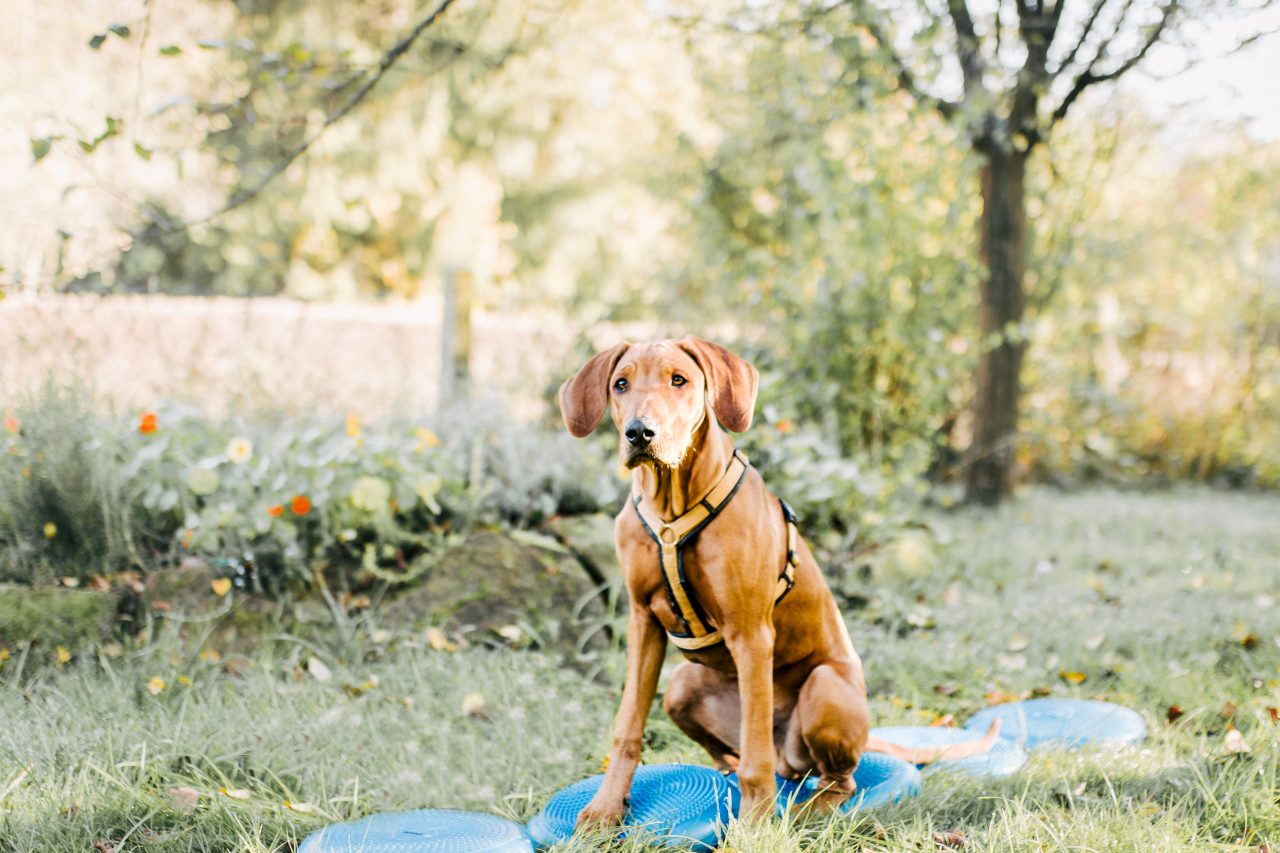 Ten things to keep in mind when bicycling with your dog